In Thailand, ‘Obesity in Our Monks Is a Ticking Time Bomb’ Buddhist monks collecting alms last month in Bangkok. Devotees’ abundant offerings of sugary or high-fat foods are contributing to a weight problem among monks.CreditCreditAmanda Mustard for The New York Times

BANGKOK — The Buddha, in his laughing incarnation, is often depicted with a jolly smile and a giant, quivering belly. That model of plenitude seems ever more apt in Thailand, where the waistlines of the country’s Buddhist monks have expanded so much that health officials have issued a nationwide warning.

In June, officials from Thailand’s Public Health Department urged laypeople to offer healthier alms to monks, who pour from temples in their saffron robes each morning to roam the streets collecting their meals in the Buddhist tradition.

Obesity has reached alarming levels in Thailand, which ranks as the second-heaviest nation in Asia, after Malaysia. One in three Thai men is obese, while more than 40 percent of women are significantly overweight, according to Thailand’s national health examination survey.

Monks are at the forefront of the problem. Nearly half are obese, according to a study conducted by Chulalongkorn University. More than 40 percent have high cholesterol, nearly 25 percent have high blood pressure and one in 10 are diabetic, the study found.

“Obesity in our monks is a ticking time bomb,” said Jongjit Angkatavanich, a professor of food and nutrition at the university’s Faculty of Allied Health Sciences in Bangkok. “Many of the monks are suffering from diseases that we know are actually preventable.” 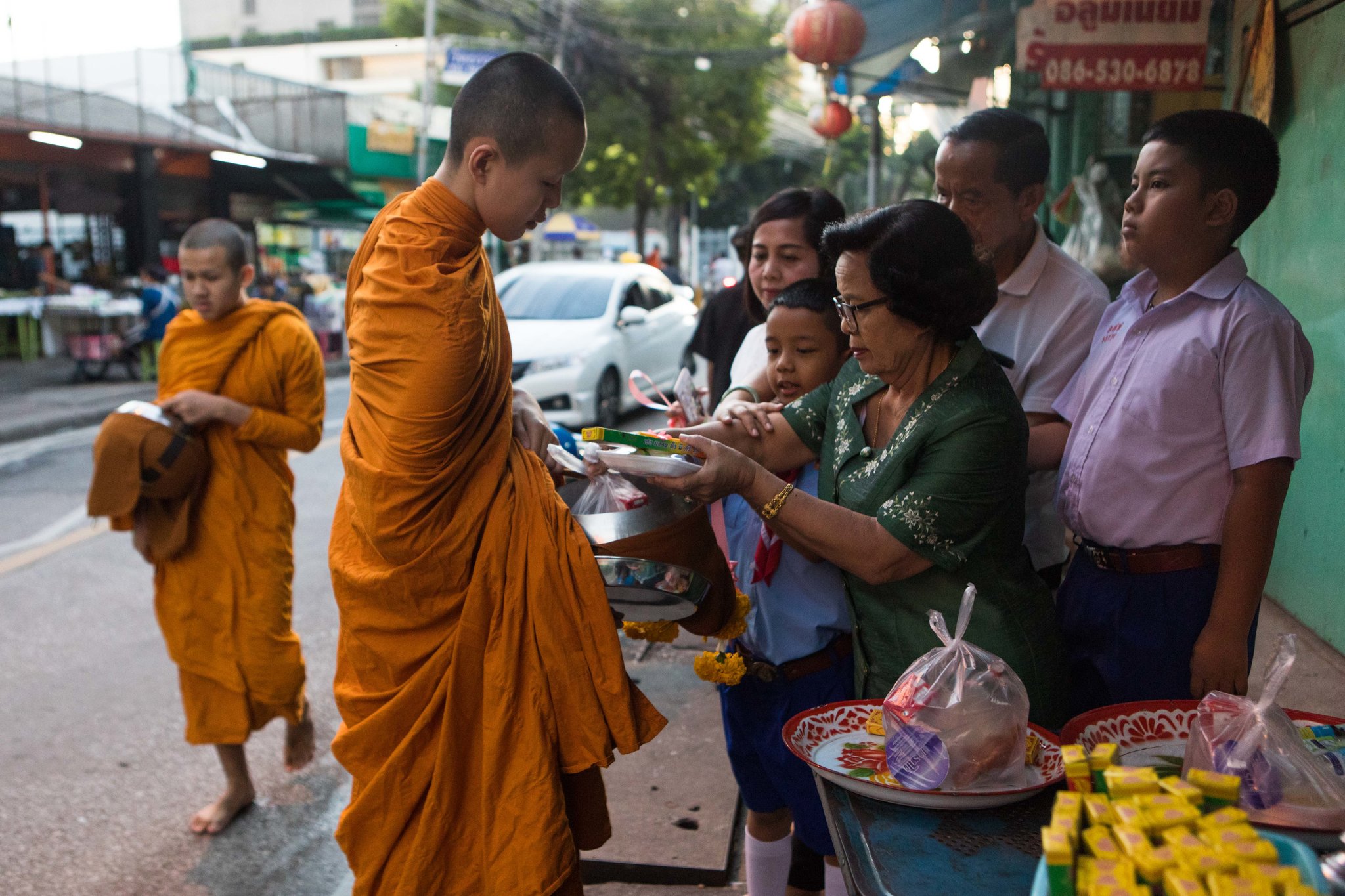 Young monks during almsgiving in Bangkok last month. Almost half of Thailand’s monks are obese, and the government is urging people to give them healthier food.CreditAmanda Mustard for The New York Times

When researchers began studying Thai monks’ dietary habits, they were baffled. The monks consume fewer calories than the general population, but more of them are obese.

Monks are forbidden to eat after midday, so to keep their energy up, many rely on highly sweetened beverages, including energy drinks.

Thai Buddhist devotees believe that offering alms secures them good karma in this life and the next. Sometimes, they also hope to bestow good luck on deceased family members.

But the well-meaning religious offerings of sugary drinks and fatty foods are having unintended health consequences.

“Soft drinks, boxed juice, sweet snacks, plus many of the foods are store-bought, which means they are packed with MSG and are low in protein and fiber,” Professor Jongjit said, listing the unhealthy food items that monks regularly receive.

Additionally, so many Buddhist worshipers donate store-bought food that the excess is sometimes resold to shops. Some unscrupulous vendors recycle it, meaning that monks can receive spoiled food in their alms.

Some almsgivers still do things the old way. Vilawan Lim, a homemaker in Bangkok, has been offering monks home-cooked food every morning for more than a decade. As a matter of principle, monks are not supposed to show preferences for particular foods, but she said the monk who comes by her home each morning drops hints about what he really enjoys. 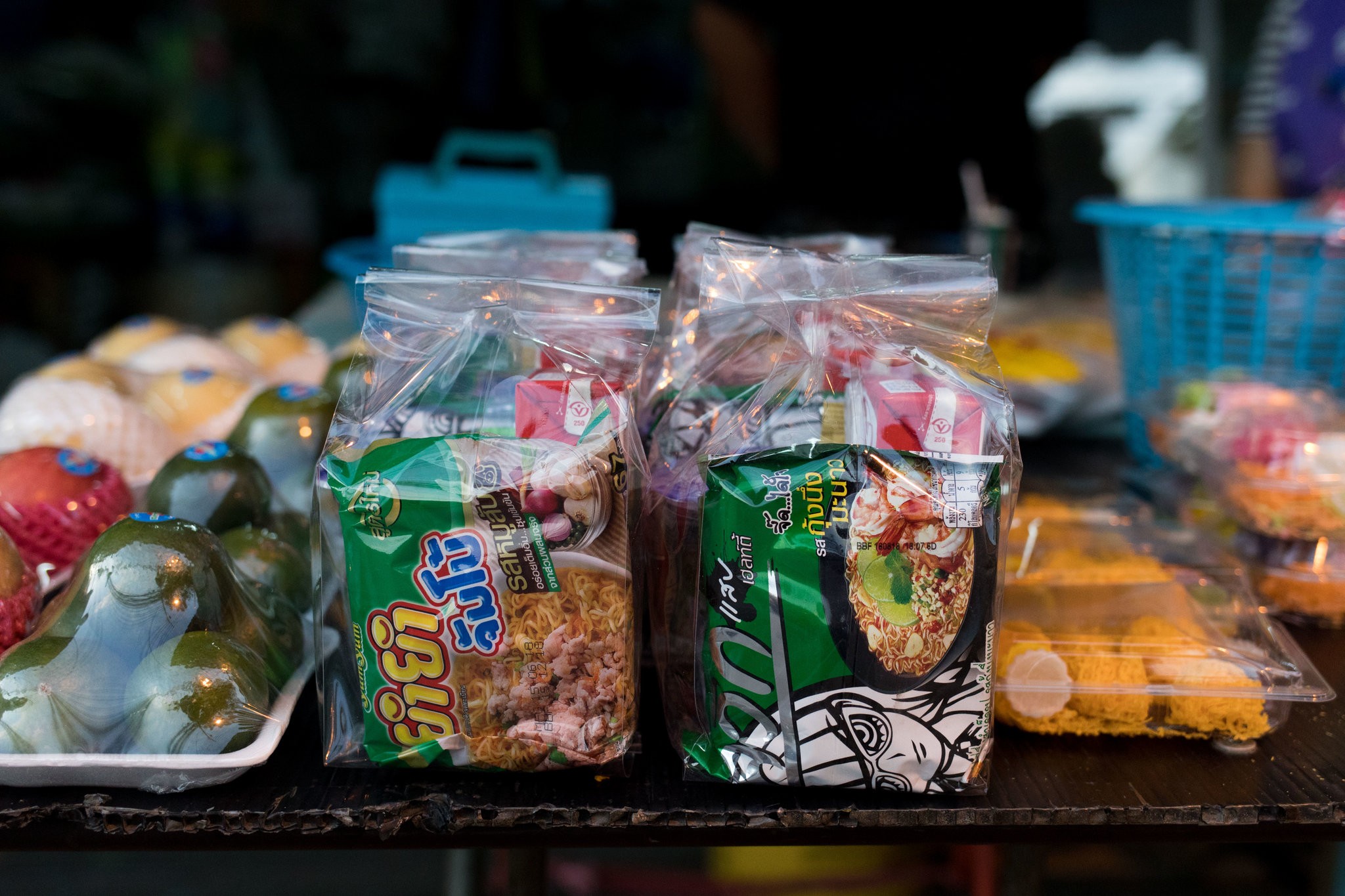 Prepackaged food, sold to be given to monks. “Soft drinks, boxed juice, sweet snacks, plus many of the foods are store-bought,” a nutrition professor says, describing some typical donations.CreditAmanda Mustard for The New York Times

“Today’s spicy dip is his favorite,” Ms. Vilawan said as she mixed chiles, garlic, lime, and shrimp paste into a pungent concoction served alongside blanched vegetables.

She waited outside her home for the monk, who arrived for the offering at his regular time, chanting a short blessing before leaving for the next house. As his alms bowl was filled with bags of food and packaged drinks, he transferred its contents to a bucket carried by an assistant. Within 10 minutes, the bucket was filled to the brim with culinary offerings.

“I don’t really know about obesity in monks,” Ms. Vilawan said. “But I do realize that the monk who comes at 6 o’clock is pretty heavy, and his health seems to have deteriorated lately.”

Working with the Thai government and religious authorities, Professor Jongjit manages the Healthy Monk-Healthy Nutrition Project. Funded by the Thai Health Promotion Foundation, an autonomous government agency, its goal is to improve monks’ lifestyles through education about nutrition and physical fitness.

Its pilot program in 2016 involved 82 monks at temples and a monastic college, and its results were positive, with weight loss and lowered cholesterol levels recorded.

Now the project publishes recipe booklets that Buddhist devotees can use to make healthy and inexpensive meals for monks. Some suggestions include brown rice with a small amount of protein and lots of vegetables. (While traditional Thai food mixes a little meat or fish with plentiful vegetables, modern cuisine uses much more fat and sugar.)

The project encourages monks to keep a log of their daily physical activities. Exercise, something as simple as walking around the temple for at least 40 minutes a day, can make up for the quiet pace of their monastic duties. 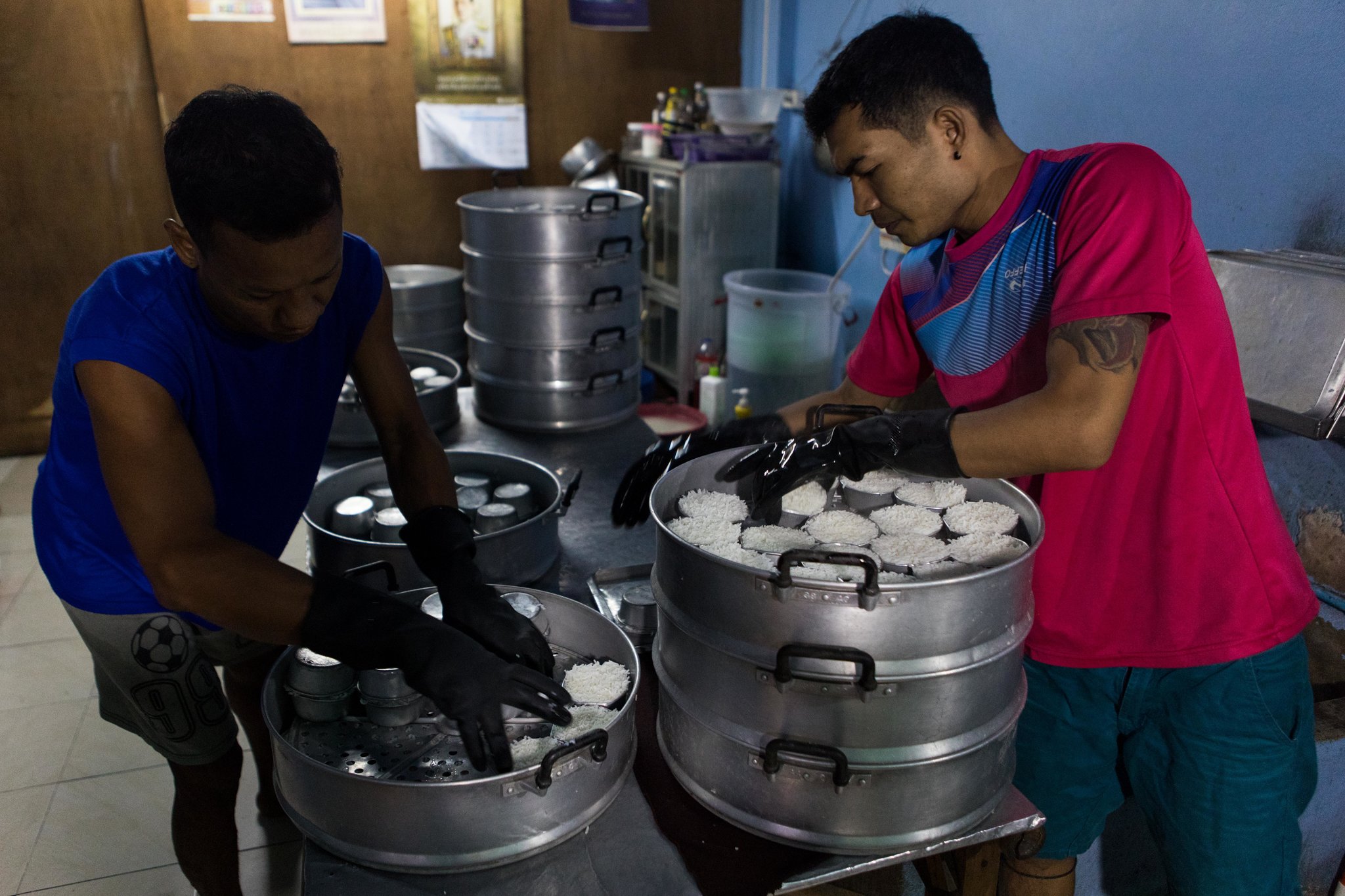 Preparing rice to be given to monks in Bangkok. “Monks should be mindful of what they eat,” said a former director of a Thai Buddhist college.CreditAmanda Mustard for The New York Times

Monks told researchers involved in the project that they often didn’t realize they were putting on weight because of their loose-fitting robes. Professor Jongjit and her team came up with a belt with knots to indicate where they thought a healthy waistline should be. They also provide monks with a measuring tape divided into four colors, to indicate various belly sizes.

In a country that is 90 percent Buddhist, Thai monks are revered as ascetics, dedicated to aiding laypeople on their paths toward enlightenment. Pointing out the community’s weaknesses — which have recently included sex and corruption scandals — can be tricky.

“We tried to develop something that is functional and that doesn’t hurt the monks’ self-esteem,” Professor Jongjit said. “It is heartwarming to see how they playfully compare the knots of their belts and realize they have gained weight and that it is time to cut back.”

The problem of overweight monks is not isolated to Thailand. In 2012, the Sri Lankan government issued guidelines from medical experts and nutritionists on the kinds of food that devotees should offer to holy men.

In December, the Thai Monk Council issued its first policy recommendations on monastic health, including diet and exercise advice for monks, as well as guidelines for the laypeople who feed and care for them. The council also urged monks to take charge of their own nutrition and to promote healthier living among their peers, as well as Buddhist devotees.

“Monks should be mindful of what they eat, the amount as well as the kind of food,” said Phra Maha Boonchuay Doojai, former director of the Chiang Mai Buddhist College in northern Thailand, who was involved in drawing up the recommendations.

“It is one of the Buddha’s teachings,” he said. “When we are healthy, we can serve the people better.”