The Global Banana Ruckus – Face off with the Fusarium Wilt

The global banana industry, valued at $36 billion is facing its greatest enemy in the form of the Banana Fusarium Wilt disease, colloquially known as the ‘Panama disease’. The destructive fungus infects the roots of banana plants causing the wilting of its leaves. In 2016, the Food and Agriculture Organization of the United Nations cited it as one of the world’s most destructive banana disease.

Since its first recording in 1874, the soil-borne fungus Fusarium oxysporum f. sp. cubense (Foc) has dodged efforts of eradication. The Foc is classified through its three pathogenic races which are the Foc races 1, 2, 4, based on their discriminatory damage of specific banana cultivars. The race 1 which almost wiped off the Gros Michel banana variety in its entirety, initially disappeared for the first part of the 21st century, and re-emerged as a more virulent form (the race 4) targeting the previously resistant Cavendish varieties, a one triploid subgroup (AAA genome group), originating from a single clone and contributing to almost half of the global banana production. The TR4 is subdivided into the subtropical race 4 (STR4) and tropical race 4 (TR4) to identify the strains based on geographical locations for the cultivation of the Cavendish banana. Global efforts for containment of the fusarium wilt focuses on the TR 4 due to its devastating impact on the thriving markets of the Cavendish. It is important to also note that the TR4 has a wider host range in addition to the Cavendish bananas as it is capable of damaging cultivars vulnerable to races 1 and 2, such as Gros Michel, Silk, Pome and Bluggoe.

The fungus enters the plant via the roots and knocks down the water and nutrient uptake by colonizing the vascular system. The wilting of leaves begins soon after, followed by the splitting of the pseudostem base and plant death. It remains in the soil for an unspecified amount of time, hindering continuous cultivation of similar susceptible varieties. Till date, no chemical means of control have been found to manage the TR4. The TR4 was first identified in Taiwan and remained contained for almost two decades within Asia and Australia’s Northern Territory. In 2013, the TR4 spread its ‘wings of destruction’ to Jordan, followed by Africa. Sometime in 2015, Pakistan and Lebanon joined the bandwagon of countries where the disease made its unwelcomed presence. Breaching worldwide quarantine efforts, the disease has spread at a lightning pace through infected planting material, soil, and water. Countries in Latin America and the Caribbean (LAC) remain vigilant for possible intrusion of the disease. An incursion of the TR4 into LAC will bring a catastrophic ‘dent’ to their currently thriving banana industry which depends almost largely on the Cavendish.

The research scene on the Banana Fusarium Wilt remains a vibrant one with findings leading to greater empowerment of knowledge and potential management of the disease. Parallel efforts are being undertaken across the globe for identifying disease resistant clones. The use of resistant Cavendish varieties acquired from Taiwan through the non-conventional breeding method is favorably being adopted by some countries in Asia. The Giant Cavendish Tissue Culture Variants (GCTCVs) 218 and 219 has helped Philippines banana growers in shielding their farms from the ravages of TR4. A $ 2.2 million programme launched by the Philippines government seeks to assist smallholders in farm rehabilitation using an integrated approach from growing the GCTCV 218 and 219. 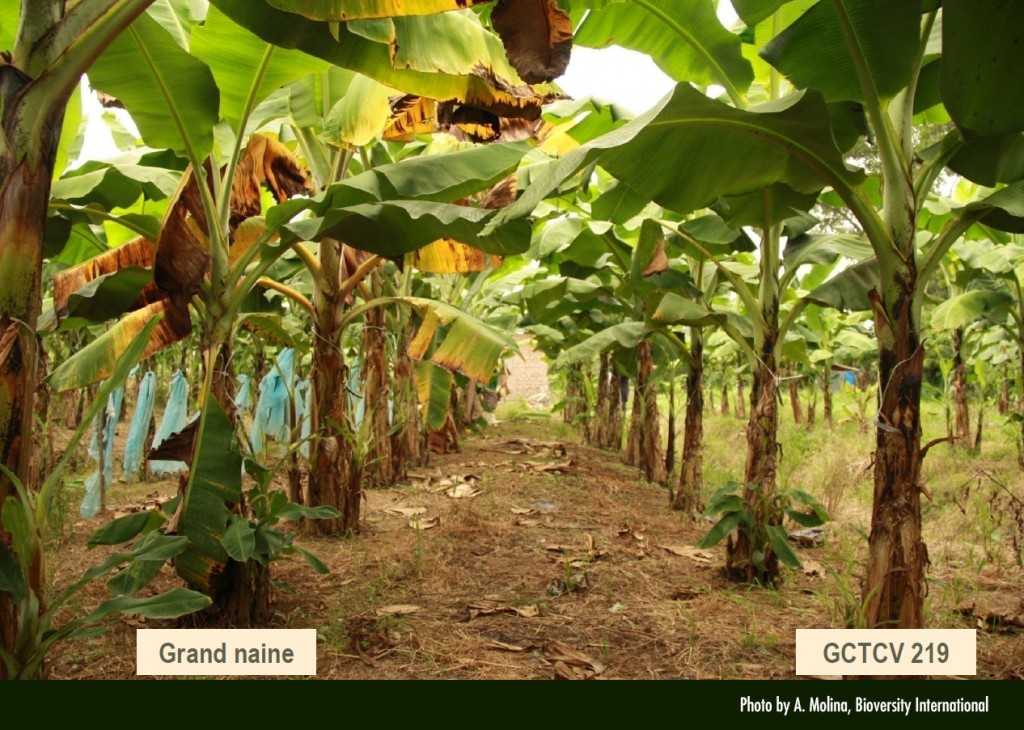 The ZJ4 and ZJ6 Cavendish-like somaclones developed by the Guangdong Academy of Agricultural Sciences has also shown potential for disease resistance after field trials indicated low levels of the disease to be observed.  Another area of research interest is molecular-based breeding. Researchers are cautiously tapping into the strength of Genetic Modification (GM) technology as an option. Field trials are being undertaken on the potential of GM bananas to fight TR4 and most recently in February 2017, reports have emerged that The Queensland University of Technology will be running field trials by growing two hundred modified lines of Cavendish bananas in hopes of finding a resistant variety. There still remains an unsolved contention between groups of researchers who are divisive in their views on non-GM to GM methods, and the debate continues on the efficacy, strength, and viability of these two methods for creation of disease-free cultivars.

Other than the development of disease-free cultivars, key research areas remain open for seeking a comprehensive solution for purging out the TR4. The untapped genetic reserve of wild bananas for finding desirable traits, resistant genes and potentially definitely offers a substitute for the Cavendish banana. The exploitation of the gene pool combined with genomics can open new doors for the eradication of the Fusarium wilt. The understanding the mechanism of which the disease develops is of economic importance and the knowledge on this remains poorly understood. There have also been a number of calls to go back to fundamental studies and also to firstly improve the understanding on how soil conditions act as a conduit for this fungus to thrive, even after the host plant is culled.

The rapid roll-out of clonally propagated Cavendish into large planting areas has successfully met the tailored preference of the market. However, this reliance on such a narrow genetic diversity is a pathway to increased vulnerability to pest and disease and facilitates the spread of the TR4. The time has come to educate consumers to accept other exotic banana varieties and this then reduces the market dependence on the Cavendish.

Prevention is better than cure and this may well apply for saving the banana industry from collapse. Since a permanent solution for disease containment remains beyond reach, growers are forced to rely on temporary preventive measures such as the relocation of plantations as commonly practiced by growers in the past, the use of clean planting materials and limiting the transfer of soil from one location to another to reduce the risk of cross-contamination. These remain practical remedial measures in ensuring the production of bananas for the industry. Best practices which may have been effective in past years have now become insufficient and new integrated approaches are urgently sought after for better management of TR4. The request by FAO and international bodies to review and strengthen national quarantine procedures should be taken seriously by affected countries to prevent the spread of TR4 to new territories. 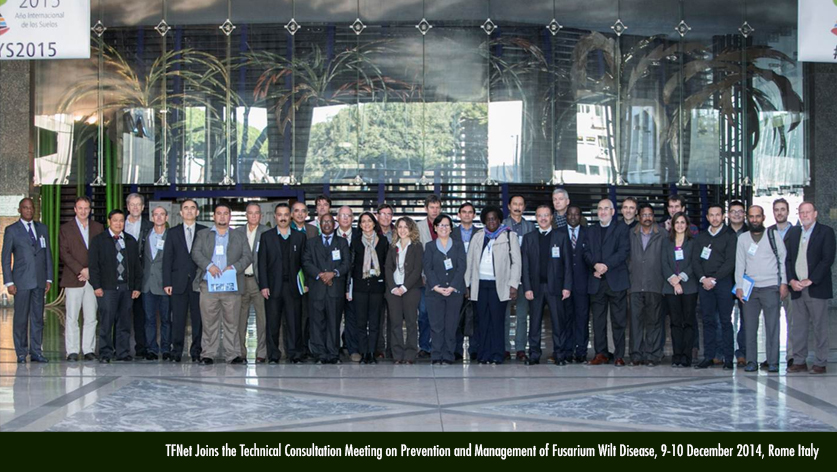 The International Tropical Fruits Network has been actively bringing together experts from its member countries to seek for the formulation of an effective response for management and prevention of the TR4. The global network has been playing an important role in harmonizing approaches to address this global concern. It is currently seeking to work closely with FAO and other global partners and initiatives through a global programme in ensuring the sustainability of banana production through the management of risks and impacts brought upon by the incessant onslaught of the TR4.