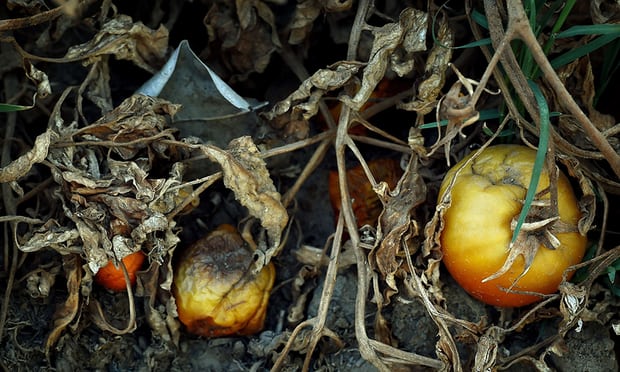 A dead tomato bush in the drought-affected town of Monson, California. About 33% of the world’s farmland is estimated to lack the nutrients essential for growing crops. Photograph: Mark Ralston/AFP/Getty Images

It’s not just animals, many seed crops are also endangered. So why is agrobiodiversity so overlooked? This valuable source of affordable, nutritious food could disappear if we don’t act.

A “sixth mass extinction” is already under way, scientists are now warning us. Species such as the Bengal tiger and blue whale are vanishing at an alarming rate, and mournful eulogies are being written on how those born in 20 years’ time may never see an African elephant. But who is writing the eulogy for our food? Huge proportions of the plant and animal species that form the foundation of our food supply – known as agrobiodiversity ­– are just as endangered and are getting almost no attention.

Take some consumer favourites: chips, chocolate, and coffee. Up to 22% of wild potato species are predicted to become extinct by 2055 due to climate change. In Ghana and Ivory Coast, where the raw ingredient for 70% of our chocolate is grown, cacao trees will not be able to survive as temperatures rise by two degrees over the next 40 years. Coffee yields in Tanzania have dropped 50% since 1960.

These crops are the tip of the iceberg. Across the world, 940 cultivated species are threatened. Agrobiodiversity is a precious resource that we are losing, and yet it can also help solve or mitigate many challenges the world is facing. It has a critical yet overlooked role in helping us improve global nutrition, reduce our impact on the environment and adapt to climate change.

According to the World Health Organisation, poor diet is the biggest cause of early death and disability. Globally, 2 billion people are undernourished, while 2 billion are obese and at risk of contracting diabetes, heart disease and cancer. Focusing on large-scale intensive production of starchy crops for calories rather than nutritious diets has led to serious levels of obesity around the world, from the US to Kenya. Our agrobiodiversity base can be a source of affordable, nutritious food – provided we don’t let it disappear.

Take gac, a fiery red fruit from Vietnam with astronomical levels of beta carotene (which the body converts to vitamin A). Or the orange-fleshed Asupina banana, which has such high levels of carotenoids that a preschool child could meet 50% of their vitamin A requirement by consuming just one per day, when they would need to eat 1kg of some other varieties to reach the equivalent nutritional benefit.

These relatively obscure species can offer incredible levels of nutrition, but only if they are still around and available to us. Food biodiversity is full of superfoods like gac – but perhaps even more important is the fact these foods are also readily available and adapted to local farming conditions. They open the way to year-round nutrition security.

About 33% of the world’s farmland is estimated to be degraded, lacking the nutrients essential for growing crops. Agrobiodiversity once again has a solution. Planting cold-tolerant legumes and forages throughout winter has helped farmers in France naturally reduce weed infestation as well as increasing soil’s nutrient content and capacity to hold water. Natural remedies such as this can enhance the sustainability of farms worldwide, reducing the sector’s impact on the environment.

According to the Intergovernmental Panel on Climate Change, global warming will reduce agricultural production by 2% every decade, while demand will increase every decade by 14% until 2050. Yet a wealth of traditional seed varieties have unique traits that make them tolerant to heat, drought and floods. They must be found, preserved and put to use in crop-breeding programmes. 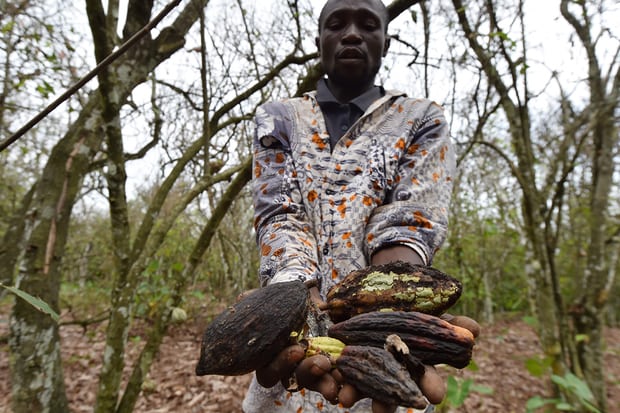 This year in Ethiopia, researchers at Bioversity International discovered two varieties of durum wheat that were not previously on the market, but yield remarkably well in dry, marginal areas. Work is now underway to breed superior durum wheat crops using these high-performing traditional seeds, to help buffer farmers against recurring droughts and combat hunger in the region.

Global efforts to protect agrobiodiversity need to be stepped up urgently. But where can governments and agribusinesses start? A new scientific review of the evidence the agrobiodiversity can contribute to a better food system and wider sustainable development issues has been produced to answer this very question.

This assessment forms the basis for an Agrobiodiversity Index that can guide countries and companies towards the most impactful investment opportunities. These can range from increasing research and development on agrobiodiversity, to introducing more diversity into food supply chains. It will enable agribusinesses to estimate and monitor the impact of their supply chain investments and ensure future product lines are both sustainable and resilient. Similarly, governments will be able to channel funding into agrobiodiversity interventions that will safeguard domestic food supply and simultaneously improve environmental sustainability.

While wild elephants and rhinos thoroughly deserve our support, we should also be raising the alarm for our disappearing agrobiodiversity. After all, if there is one thing we cannot allow to become extinct, it is the species that provide the food that sustains the 7 billion people on our planet.