Can agriculture and the climate fix their 'unhappy marriage' in 2018? 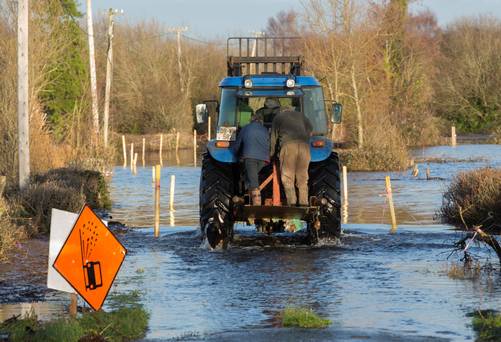 Ferrying neighbours through the floods at Mukanagh, Athlone in 2015. Picture: Fergal Phillips

After René Castro-Salazar attended the first UN led climate talks in Berlin in 1985 as Costa Rica’s environment and energy minister, he tried to talk about agriculture and climate change - but few wanted to join the conversation.

“There was always opposition - and we couldn’t understand why,” said Castro, now assistant director-general at the United Nations’ Food and Agriculture Organization (FAO).

To him, the need to tackle the topic was clear.

Agriculture, forestry and other land uses together account for nearly a quarter of the greenhouse gas emissions heating up the planet, according to the FAO.

Cutting these is essential if the world is to keep global temperature rise to a manageable level, said Castro.

Farms and forests can also store large amounts of carbon, and simple actions by all countries could result in immediate environmental benefits, he told the Thomson Reuters Foundation.

In the early years, the climate negotiations focused on reducing emissions from the energy sector - the largest emitter - while the relationship between agriculture and climate change was not fully understood.

Later on, poor states feared discussing the linkage would result in obligations for them to curb emissions from farming. Rich nations worried they would have to pay for poor farmers to adapt to a changing climate.

At November’s climate talks in Bonn, the stalemate was finally broken, with nations agreeing to move forward on issues related to agriculture and climate change.

“There is now clearly the political will to see this resolved,” said Margarita Astralaga, director of environment and climate at the International Fund for Agricultural Development (IFAD).

Many hope it will lead to the development of farming systems that are more resilient to weather extremes and can feed a growing population whose diets are shifting to more meat and dairy, without corresponding increases in emissions.

Andy Jarvis, research director at the Colombia-based International Center for Tropical Agriculture (CIAT), describes the relationship between climate and agriculture as an “unhappy marriage”.

“(They) are absolutely intertwined and completely connected to each other but actually pretty antagonistic,” he said, pointing to how crops are battered by climate extremes while farming emissions exacerbate global warming.

Scientists have warned that world temperatures are likely to rise by 2 to 4.9 degrees Celsius this century compared with pre-industrial times.

This could lead to dangerous weather patterns - including more frequent and powerful droughts, floods and storms - upping the pressure on agriculture.

Curbing climate change will require overhauling the world’s food production and distribution system, which is “off the rails”, said Olav Kjørven, chief strategy officer at the Oslo-based EAT Foundation.

Hunger is on the rise, biodiversity is being lost and poor diets now pose a bigger threat to human health than alcohol and tobacco, said Kjørven, a former senior U.N. official.

Educating consumers will be key to changing that, especially in developed economies where there is high consumption of red meat, responsible for more emissions than other types of food, he said.

“People vote three times a day for a food system they want, in terms of the food they buy. There is enormous power there,” he told the Thomson Reuters Foundation.

EAT has commissioned scientists to produce a report next spring about what constitutes a healthy diet in a sustainable food system.

Livestock, meanwhile, account for nearly two-thirds of agricultural greenhouse gas emissions, but combining trees, crops and animals in “silvopastoral” systems can offset some of those emissions and boost the quality of pasture, he added.

Another challenge is to boost food production without damaging forests, said IFAD’s Astralaga.

Agriculture is responsible for more than three-quarters of global deforestation, and if the trend continues, about 10 million square km of land will likely be cleared by 2050, she noted.

A 2016 report from the FAO said it would be possible to increase food security while maintaining or increasing forest cover, identifying 22 countries - including Gambia, Chile, Tunisia and Vietnam - that have managed to do so.

To duplicate such practices, especially in the developing world, will require sharing of knowledge, experts say.

“They don’t know if the rain is coming ... if a drought is coming. They’re blind in terms of agricultural planning,” he said.

Much of the information they need is available, said Jarvis. CIAT and the International Food Policy Research Institute are leading a push to use “big data” in agriculture, and get it into the hands of poor farmers in places like Colombia and Honduras.

“As a result of that information, (you can) make much more strategic decisions in terms of when to plant, how to plant, what variety to plant,” he said.

Another pilot run by Microsoft and the International Crop Research Institute for the Semi-Arid Tropics sends text messages and automated calls to tell Indian farmers when to sow their seeds or warn them of a pest attack.

But more investment and political will are needed to expand such projects, Jarvis said.

EAT Foundation’s Kjørven said the world has “barely started to fight this battle” to make agriculture greener - and the coming few years will be decisive.

“The real test is whether we start to see countries passing different legislation, businesses and industries coming up with different ways of doing business in the food sector, and changes in consumer preferences and choices,” he said.