COVID 19 is foreseen to substantially reduce by a significant 3.11% the volume of agriculture output in Southeast Asia (at 17.03 million metric tons or MT) for the first quarter of 2020 as a result of a decrease in farm labor affecting 100.77 million farmers.

In a policy paper, “Impact of COVID-19 Pandemic on the Agriculture Production in Southeast Asia: Reinforcing Transformative Change in Agricultural Food Systems,” SEARCA asserts that a unique balance must be achieved among Southeast Asian countries on two important goals—trade and food security.

It is understandable that countries would first think of its own food security before others. But a
“collective” enhancement of capacities leading to higher agricultural productivity is crucial.  It will benefit all ASEAN (Association of Southeast Asian Nations) countries, the paper of Dr. Glenn B. Gregorio, SEARCA director and Rico C. Ancog suggested.

“While most of the efforts are targeted within a country, it would be critical that policies supporting trade in ASEAN must be strengthened to simultaneously support productive and inclusive agricultural systems that ensure food security in the region.”

As COVID 19 has become a universal problem in ASEAN that requires a region-wide approach, more collaborations may be done via the platform of the ASEAN Economic Cooperation (AEC).

Factors and actions that block more open trade flows and enhanced partnerships must be controlled.

“Effective coordination mechanisms among countries to reduce trade and food insecurities both at the national and regional levels in the long-term must be continuously pursued.” Further studies are recommended on this collaboration.

Agri-entrepreneurship, rather than considering farming as a mere job, must be supported through policies at the domestic fronts. 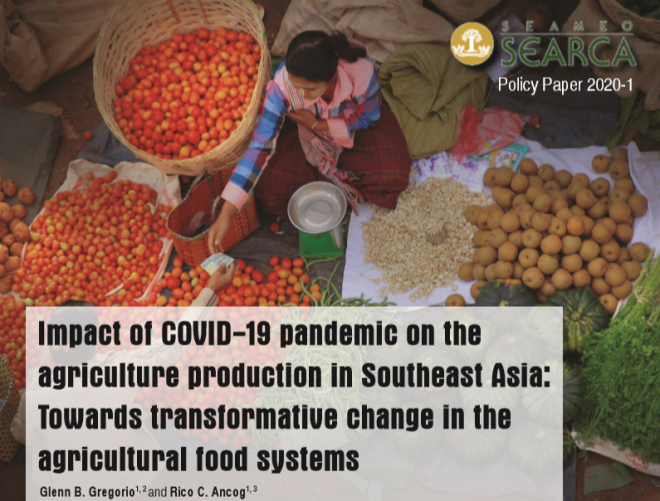 That would need to train and mentor significant number of a new breed of farmer-entrepreneurs, given that the average age of traditional farmers in the Philippines is 57-year old. It should include the youth, and especially women who usually take the lead in a family’s food and nutrition aspects.

In light of ongoing pandemic, this also urgently calls for a food policy on immune system-boosting, and the need for a COVID 19-controlling nutritional food orientation.

“At the individual and household levels, information related to healthy diets and lifestyles, agricultural produce that are nutritious and rich in micronutrients, food preparation and preservation techniques, as well as waste management strategies must be made accessible.”

Obviously, critical in this “transformative” food security policy is financing.

Newbies in agriculture will be afraid to try a new business, risk-laden at that due to its vulnerability to changing climate.

“As risks and uncertainties arise related to price volatilities, inclement weather, and climate-change-related hazards that characterize farm production systems, there is a need to support (studies on) design of financial technologies for farmers,” said Gregorio and Ancog.

The purpose is also to make financing of agricultural activities benefit a significantly larger scale of population.  This is to include middle class in urban areas that may engage in urban farming and more especially resource-poor communities in rural areas.

Agriculture remains a major job-generating sector in ASEAN with 31% of combined population employed in agriculture.

This is antithetical as the sector’s contribution to GDP has been decreasing.

“Except for Singapore, Malaysia and Brunei Darussalam, at least 23% of total labor force of each of ASEAN countries has agriculture as its main source  of livelihood, and as high as 62% in the case of Lao PDR.”

Regrettably, this is the sector where the poorest people and income inequality among the population in Southeast Asia are found.

That poverty among farmers is not without severe consequences to food security and nutritional status of the region’s population.

The COVID 19 lockdown, along with the poverty factors just cited, is further draining the number of agricultural labor force, dragging GDP lower.

The COVID-19 constraints on transportation and people’s movement results in a 1.4% decrease in labor supply (International Policy Research Institute or IFPRI).

“This decrease in GDP could mean more families being pushed below the poverty line. Poverty impacts in Southeast Asia could push an additional 14.68 million families to live below the $1.90 a day threshold thereby straining the region’s ability to meet its poverty eradication targets per Sustainable Development Goals (SDGs) in 2030 .”

Moreover, as of 2019, there were 81.7 million undernourished population in South East Asia. The Philippines itself has critical undernourishment level – at around 15% of population as of 2017, placing third next to the most undernourished countries in ASEAN (Lao PDR and Cambodia).

Nevertheless, the following transformations, among other recommendations, are reinforced to radically improve agriculture sector’s role in socio-economic development and in addressing poverty:

“Consumers are now becoming more aware of the intricate link between what they have on their plates and the quantity and quality of farm production.  This could be capitalized to encourage more programs and budget allocation from governments as well as private initiatives related to agriculture, such as farm-based small-and-medium enterprises.”